‘Small Island’ at the National Theatre

Posted on June 7, 2019 by Admin under SHOWBIZ, THEATRE

‘Small Island’ and the National Theatre on the South Bank

As a member of the Society of Television & Design (STLD) through my career as Lighting Director for Central Television, myself and other members were invited to the National Theatre (NT) to see a camera rehearsal of ‘Small Island’ for NT Live, the play based on the novel by Andrea Levy and adapted for the stage by Helen Edmundson.

NT Live has been running for ten years and is a wonderful way for audiences around the world to see and appreciate the very best of London theatre.

The reason for our visit was that the Chairman of STLD, Bernie Davis, was modifying the lighting from the original design by Paul Anderson so as to be seen live in 2,500 cinemas around the world as part of the National Theatre Live initiative. Theatre lighting is right for a seated audience but lighting for television generally works best if there is less contrast which a TV lighting director like Bernie Davis, who has done many of these events, would know how to do.

After donning Hi-Vis vests, we were led on a tour around some of the backstage areas. The ability to do this well was built into the NT with covered walkways high up so public and private tours would not get in the way of work, they are also safer for everyone. We were able to go into all three of the theatres â the Dorfman, Lyttlelton and Olivier Theatres.

The emphasis of the STLD tour was lighting and NT like all theatres is changing over from tungsten to LED lights. There is a real love for traditional tungsten and people are trying to keep it in use but LED is slowly taking over.

The changeover will happen slowly as lighting designers get used to using LEDs and the price of them will drop as volume increases. LED use less electricity so are a Green way to go which is a key selling point for them. The ability to change to any colour via a control board is another. When I was lighting for television and theatre I could only use a gel placed in front of each lamp and had to choose the colour. I would have loved to have had the ability to adjust colour but LEDs were not in use then.

Bernie Davis gave a talk on how he modified the lighting of the production for television which was fascinating and much more involved than people would believe. It involved watching a rough recording and going through it while making notes of what to change, this would usually take eight hours.

After lunch we sat with a full house to see the production in the Oliver which was essentially a final rehearsal for all the crew before the live event the next day.

The play was a brilliantly staged, directed and acted performance with a large spirited cast of forty. The design and lighting were beautifully integrated and the sound was excellent too. A great production that I’m sure the worldwide audience and at will enjoy as well as audiences who see it at the theatre. 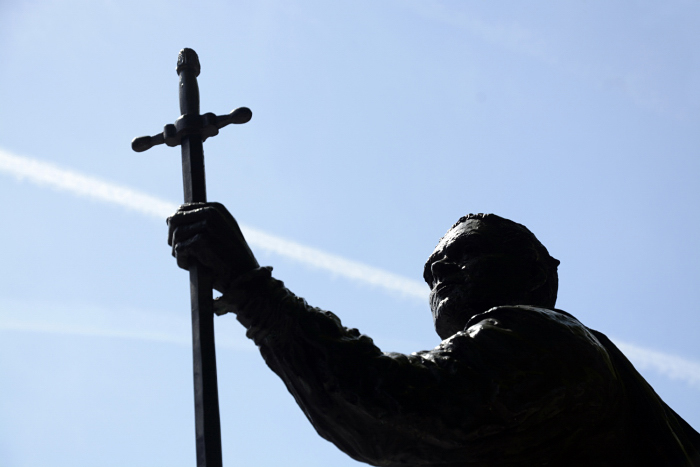 Laurence Olivier as Hamlet, created by the sculptor Angela Conner, in front of the National Theatre

3 thoughts on “‘Small Island’ at the National Theatre”